HomeUncategorised Meniscus injuries – What to look out for?

Meniscus injuries – What to look out for? 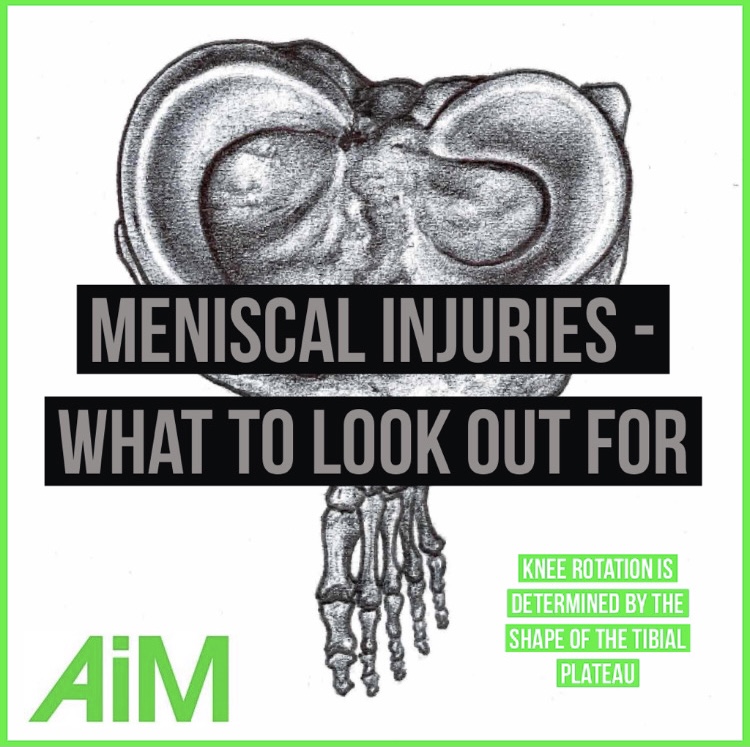 When it comes to injuries I don’t like to take a cookie cutter approach of ‘if you see this then you must do that..’ but in some instances there always seem to be some pretty steadfast structural scenarios that simply cannot be ignored.

To not take the cookie cutter approach is to be more methodical, more investigative and to ask better questions. Moreover, the investigation needs to be in the realm of how this person ended up in the postures we are going to discuss in the first place.

The guy who’s hip started wearing down until it needed replacing, his hip didn’t wear down for no reason. His overall posture ultimately will have contributed to the hip’s demise. This should always become clear (I wanted to say obvious, but will revert to clear) as you assess the full body resting posture (how the person stands) and how the person moves and specifically walks. When a person is stood up, limitations in a joint always demand a response from structures above and below that become evident when we assess standing. Similar responses or adaptations are not always visible or assessable when a person lays down. Being upright produces forces that pass through these adaptations which then must be managed by the body.

Now in the case of knee injury or meniscus injuries, should we be surprised that it happened? Could we have predicted for instance the possibility of it happening on one side? Could it have been prevented? And in the absence of having checked for it beforehand and being surprised by it arising… should it be challenging to treat?

Knees are generally categorised as a nightmare to work with and many a surgeon believe themselves to be the God of knees as so many seem destined to fall under the knife.

The medial tibial plateau is larger than the lateral plateau upon which the medial and lateral meniscus can be found. They act as shock absorption ‘tyres’ in which the two condyles of the femur sit and where the articulation of movement in the knee takes place.

Movement of the knee is not as straight forward as might be first thought. To most it’s a case of bend and straighten, but it’s not as simple as that. The Flow Motion Model arose out of a curiosity of how the joints in the body articulate in three dimensional space and in association with each other. The knee itself moves in two dimensions, or two planes of motion. These planes are the sagittal plane incorporating flexion and extension (or bend and straighten respectively) and also the transverse (rotational) plane incorporating internal and external rotation. This gets confusing for many as this is determining a specific rotation that is taking place within the knee rather than the direction in which the knee looks like it is rotating which is often mistakenly referenced by looking at the patella.

Movement takes place within the knee as a result of the relational movement between the femur (thigh bone) and the tibia (shin bone) articulating on the meniscal cartilages.

The tibia bone sits atop the talus bone which is the only bone that connects the foot with the rest of the body. With a rather unfortunate reputation the talus has long been known as the ‘dumb’ bone as it has no muscular attachments on it. But in my altered view of Joints ACT and muscles REACT, the talus being a bone becomes more like the Emperor than a dumb bone. Being the only bone that communicates movement form the leg to the foot and vice versa, it becomes a pretty important bone to consider.

With the majority of feet being flatter than their desired posture (I hesitate to use the word pronated as it is not strictly true in my book) the talus is left rotated toward the inside edge of the foot and has a direct impact on the tibia causing the tibia to rotate internally.

If you want a little rule of thumb here (and if you are still with me of course) you could say that if your patella is facing inwards (as it does when your foot pronates) then your knee is rotated externally.

Add to this that a pronation of the foot usually – but not always – creates a flexion in the knee. The only way to straighten your knee, when the foot is flat is to create a hyperextension. This is not the type of extension anybody wants at their knee and yet super confusingly this is the knee shape that the medical, corrective and biomechanical world seek to promote!!

If you have a flat foot, you will have an externally rotated knee as the medial condyle of the femur slides around the larger medial meniscal ‘tyre’. If your knee is flexed at the same time, the pressure on the medial meniscus will be towards the front of the meniscus, and if your knee is extended, the pressure will be towards the back of the meniscus – because that is where the bone will be making the most compressive forces. Your anterior cruciate ligament will also be under stress in both of these scenarios where the knee is in external rotation.

So when it comes to a medial meniscus injury, it is most likely that the person has a knee that still rests in the posture that caused it. Either flexed or extended with external rotation and a pronated foot. Clues to look for on the injured knee side are:

How do you treat a meniscus injury?

The resting structure that you find yourself in with this injury, may feel like how your body has adapted to the injury – but I would invite you to consider it differently – that your leg was already in this posture before the injury which made it more susceptible. There is a chance that you can work out why you ended up adopting  this posture, but more importantly it is key to recognise that healing the meniscus requires one key thing: that you remove the pressure from the meniscus itself by altering the resting posture of the bones. Even if you have surgery, the surgery will not alter the resting pattern that you have adopted. So either way to minimise the risk of it happening again in the future AND to create an environment for healing you must address the bony positions and inter-relationships so as to re-educate the body to move differently and place less pressure on the meniscus itself.

1. Teaching the foot bones to supinate
2. The femur to externally rotate (patella facing outwards)
3. The knee to straighten with a femur rotating externally (not internally)
4. Pelvic rotation toward the leg
5. Maybe some posterior tilt

The teachings of this approach are all available in my Closed Chain Biomechanics of the Lower Limb online course which is CPD accredited and comes with a certificate too. Also as someone who may wish to work with their feet and create a more comfortable environment in your knees then please check out our Wake Your Feet Up programme as well

The knee is a complex entity for people to understand. I consider it to be grossly misunderstood, and for that reason many therapists struggle with the knee. When in reality it is simply an improved organisation and combinations of just four movements: Knee flexion and extension coupled with knee external and internal rotation.

There is no frontal plane in the knee to consider…. If there is, then you genuinely either have a problem already or you are asking for trouble.

One other way of bending the knee is to bend it outwards toward the 4th and 5th (little) toes – sending the patella outwards – thus creating an knee internal rotation. This can only happen on a supinating foot. If the foot (like most) cannot supinate well, then it is likely to be experienced by losing contact with the first metatarsal head (or big toe knuckle) which converts the foots motion into nothing more than an inversion with all the pressure on the outside of that foot. This outside edge approach ironically limits the rotation in the knee, much the same as if we fail to get pressure in the first metatarsal (big toe knuckle), we lose the potential for knee external rotation. Poor foot mechanics directly impact the knee and its connective structures, meniscus, ligaments and muscles and tendons.

Your first consideration for knee injuries must be the communication that the knee receives from the foot’s interaction with the ground. A rule of thumb is that foot motion is either good…. or it’s not. And that is one good reason as to why we have so many knee problems in both sport and society.

As a professional bodyworker, our online Educational courses are for you.

Get started with our self-assessment programmes for Everyone.